learn more about the beginnings of financial astrology

I consider legendary trader W.D. Gann the primary pioneer of financial astrology. Researching and trading both stocks and commodities in the early 1900s—when he could have been arrested for being a “fortune-teller” in New York City—Gann carefully described his methods as part of the “natural sciences.”

Today, the cat is out of the bag, and it’s clear that Gann relied on astrology and other occult systems for his forecasts.
More than a century later, traders still seek to understand how Gann discovered market-moving secrets and apply those findings to current market movement. 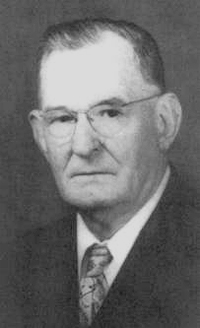 Financial astrology history moved on from strictly the markets to the economy after the Great Depression. Indeed, calls for examining how the Great Depression occurred, in hopes of preventing another one, led some economic researchers to conclude that planetary cycles were key.

Unemployed men standing in line outside a depression soup kitchen in Chicago 1931.

One of the most significant researchers was Edward R. Dewey, who was the Chief Economic Analyst at the U.S. Commerce Department in 1930 and charged with exactly that responsibility. What he discovered led him to form the Foundation for the Study of Cycles in 1941, an organization that in 2010 stated: “We proved that the planetary signals were, in fact, the undeniable cause of cycles.”

Louise McWhirter is another name from the 1930s that remains significant in financial astrology history.

Like Dewey, she sought to discover keys to U.S. economic trends. Her work focused on the Moon’s nodes, two points that cross the ecliptic (the Sun’s path in the sky).

The McWhirter Theory defines the strength of economic activity based on the zodiac sign of the Moon’s north node, the point that is crossing the ecliptic into the northern ecliptic hemisphere. 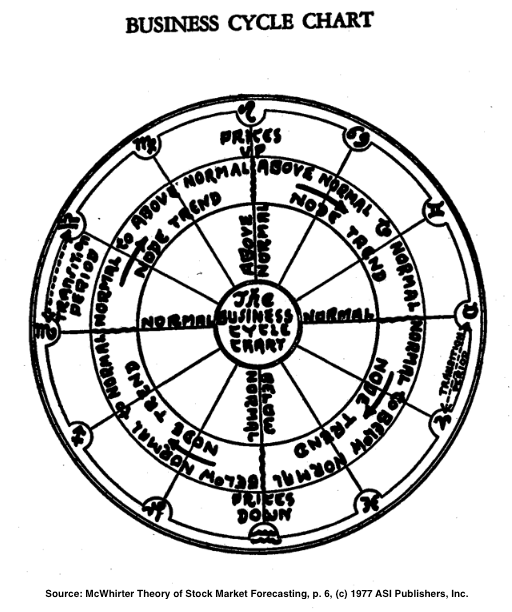 The McWhirter Theory associates the U.S. business cycle with movement of the Moon’s North Node, peaking while in Leo and bottoming while in Aquarius.

The books from LCdr. David Williams highlight his pre-computerized research into the stock market and business cycle from the relationship between transiting planets as they orbit the Sun at their varying speeds, ranging from one month (Moon) to 248 years (Pluto).

An electrical engineer by training, Williams became interested in financial astrology by watching the Sun’s influence on electricity disruption on Earth.

In the mid-20th century, as individuals began to invest directly in the stock market, financial astrologers began to focus on forecasting price movement of individual stocks and the overall market. This work has focused on analyzing the horoscope charts of when companies were incorporated and when their stock first began trading on an exchange. Many of those pioneers remain active today, including Arch Crawford, Rob Hand, Bill Meridian, Ray Merriman, Grace Morris, Christeen Skinner and Georgia Stathis.

I am grateful to all these financial astrology pioneers for sharing their findings via newsletters, lectures, books—and even personal conversation—over the years, which spurred me to do similar research in the commodity markets and publish my findings in 2018 with my book “Trading In Sync With Commodities—Introducing Astrology To Your Financial Toolbox.”

If you, too, find financial astrology intriguing, get in touch and we’ll discover how you can put it to work in your life.

Are you aligned with the Air Economy?

Stay in touch with the new paradigm’s developments.
Check markets aligned with your Sun Sign!

Join my email list for updates on Air Economy research and community development so that you stay aligned. As a thank-you, download a free list of first-trade data (sorted by Sun sign) for 24 top Nasdaq-100 stocks—plus other Air Economy markets like Bitcoin, QQQ and copper.